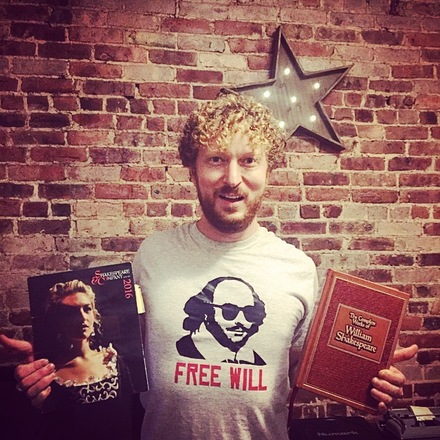 I reached my goal right before the December 1st deadline, have turned in my tuition, and am going to Shakespeare & Company's month-long intensive in January! Thank you all who supported me!!
You are the village that made this baby happen!!

The Shakespeare event was a huge success:
Come celebrate art with me on November 20th, at A Night of Shakespeare, Music, and Theater! This is my grand finale to this wonderful campaign!
Watch the promo video here!

Howdy! I am an artist and teacher. In the world of Shakespeare, this summer I performed the title character in RICHARD III, while teaching/directing at a children's Shakespeare camp in Maine! I also taught Shakespeare in college literature classes.

As an artist/teacher, I have found Shakespeare can teach us so much today (about ourselves, our society, and hard topics like sexism, racism, classism, etc ), and have decided to learn more so I have more to bring back to the community at large!

With that, I was recently accepted into Shakespeare & Company's month-long intensive this coming January! Here's where you come in. I took their weekend intensive earlier this year, and learned so much in three days; I know I will gain invaluable connections to The Bard with this month! I am a working actor, however, making enough to live and not a whole lot more - and this wonderful program is beyond my personal financial capabilities. With the $4500 tuition, travel fees, and paying for NYC rent while I'm gone, I feel the $7000 should help to cover the expenses without my diving further into debt.


For donations of $100 or more: I'll read the donor a sonnet of Shakespeare's.

For donations of $200 or more: A sonnet + I'll memorize, recite, and record a soliloquy of the the donor's choice.

For donations of $500 or more: Sonnet + Soliloquy + I'll give the donor a private Shakespeare workshop of the donor's choice!

Some Treats I released for goals met throughout the campaign:

Shakespeare's sonnets, read out as a Thank You! for all the beautiful support throughout this campaign, last read first:
Jon L Peacock Sonnet #14
Words on the Shakes & Co Intensive, from my former professor at ASU, amazing actor, director, artist, Victoria Holloway:

"I attended the very first January intensive. A life changing experience.
Went back years later for a second intensive. Equally great.
Please give my regards to Tina Packard et'al. You'll love every minute."